The Dutch Do It Better: Lowlands Festival 2019 Review

Beyond the Gates: After over a decade traveling the US and Canada for music festivals, Lowlands 2019 was meant to be my first in Europe. Chance changed that plan, and in retrospect, having Mad Cool as a warmup was probably the best thing that could have happened. With no comparison point, Lowlands may not have stood out as the completely insane event that it is.

Comparing an astroturfed parking lot festival in Spain to a 60,000-capacity camping festival in the Netherlands may be no more fair than comparing Made in America to Coachella. But Mad Cool brought bumper cars and wandering beer sellers to the table, so there was at least a base level of expectations. Which the 27th edition of Lowlands promptly surpassed with intelligent design, an astounding use of space, and an abundance of variety at all levels. The organizers put every thought into every inch, controlling the flow of both entertainment and foot traffic. There was never not something to do, nary a queue waiting to do it, and a seemingly endless supply of surprises.

This was a festival for people who love festivals — not the hashtag-fueling “place to be” sort, nor necessarily the music-central bliss-out. If Bonnaroo has been growing more toward the experiential, Lowlands would be a fine paragon for which to aspire. We already knew the lineup rivaled any music festival, European or otherwise. What Lowlands delivered in broader terms set it in a class all its own.

A$AP Forever: Just a week prior to Lowlands, there was a legitimate worry that ASAP Rocky wouldn’t be free to make his scheduled appearance. Thankfully, ASAP avoided serious penalties and was able to deliver a mosh-inducing party that included his “Smells Like Teen Spirit” cover. He even stuck around to join headliner Tame Impala for “Sundress” and “L$D”. The Aussie psych-rockers have clearly settled into their fest set over the last few years, which at this point if you’ve seen more than once you’ve seen a dozen times. That said, this performance had a particular pep in it, no doubt bolstered by what was easily the largest crowd of the weekend.

Mind Mischief: Activations can be a mild distraction at most festivals, but at Lowlands, the weirdness of it all was as appealing as anything on the stages. You could mold clay into the shape of your soul, shop at vintage retailers, play a game of life-sized Pacman, swing on the rustic playground, or rent 30 minutes of time in the secluded “shag pads” (bedded domes that… well, what else would they be for?). In place of a regular Silent Disco, Lowlands provided 30,000 wireless headphones that turned the entire site into pockets of random dancing.

Most unique was surely the sauna, where fully nude attendees could sweat it out in huts or dip in hot tubs, all heated via wood burning. Once relaxed, you could lounge by Lake Lowlands or go for a brief swim with a landscape view of the Alpha stage. With so many completely bonkers things to keep you occupied, you’d think the Dutch had outlawed downtime.

Americans Abroad: Although timing issues meant I didn’t catch as many local bands as intended, the lineup featured plenty of internationally acclaimed acts. Billie Eilish has, perhaps unsurprisingly, as ravenous a foreign fanbase as a local one. While the crowd was packed, the rainy early Saturday set wasn’t doing the pop megastar any favors. Her rehearsed but not phoned-in show was fine, though it made me wonder if we were there more for a performer or the phenomenon surrounding the performer.

The National, meanwhile, handed the Lowlands audience a prime setlist on the Bravo stage. Matt Berninger was in top form, lawlessly messing with the stage lights or jumping into the crowd. During “Day I Die”, he left the tent entirely, weaving between people in the surrounding grounds who were mostly oblivious to the rockstar in their midsts. He too, noticed Lowlands’ impressive design, pointing to the square-frame screen above the audience’s head. “Did you guys notice that the jumbotron is above you?” he said. “That’s expensive. We didn’t bring that.” They did, however, bring one hell of a performance to display on it. (That screen, by the way, lowered and became kinetic when late-night descended.)

Devil in the Details: If the devil is in the details, Lowlands was a demon’s paradise. Abundant seating — netting over the lake, picnic tables aplenty, inflatable chairs — and cover from the elements made comfort easy to find, even in rainy conditions. Some sloped structures even had LL-branded climbing holds on which attendees could rest without sliding down. Every stage was covered, most fully, with tent walls that dropped down on the sides when night came and dance music took over. The seemingly erratic layout of the activations and concessions actually alleviated crowd congestion (save for the one path in and out of the Alpha stage). So much was happening at all times, yet it was arranged with such subtle precision that it never felt overwhelming.

The Goodbye, The Bad, and the Queen: It’s still not entirely clear if this was The Good, The Bad, & The Queen’s last show ever, or just the end of the tour. If it was their true finale, though, it was a charming sendoff, replete with Victorian vibes and Damon Albarn at his most playful. black midi, on the other hand, proved to be one of the most tedious buzz bands in recent memory. Sure, their math-y genre blending sounds intriguing, but it sucks all the interest right out when half the band seems too bored to give it any gusto. (Shout out to drummer Morgan Simpson for being the exception.) For someone at the complete top of their game, Helena Hauff handily gave the most impressive display. Her mastery of build-and-drop made her the Queen of Lowlands’ party scene.

Have You Been There, Have You Seen It: Lowlands catered well to Europe’s prominent club culture with a handful of venues located throughout the site. There was the ever-random Sexyland, where one could witness a magic show, a pop-up performance, or spoken-word poetry about slavery at any given hour. Popular LGBTQ+ nightspot Adonis went from discussions on sexuality to raves, while there was always someone spinning in the Barcadi-sponsored Hacienda. More evidence of Lowlands’ magnificent heterogeneity.

Heart-Shaped Box: A handful of planned sing-along events were sprinkled throughout the weekend, none more enjoyable than Sunday’s Club 27. What could be a pretty dark concept actually was a great way to kick off the fest’s final day. Fans who had auditioned pre-festival hopped on the main Alpha stage to sing Jimi Hendrix (“Hey Joe”), Nirvana (“Lithium”), and Janis Joplin (“Me and Bobby McGee”) classics with a full band. There was even an Amy Winehouse impersonator for “Rehab”. Although the extended focus on The Doors was a bit of a misstep, the whole thing was a much more fun tribute than a hologram.

Tribute Starter: Speaking of tributes, Dutch alternative heavyweights De Staat were tapped to replace The Prodigy following the death of Keith Flint. They opened with a droning rendition of “Firestarter”, a song they covered as a lounge-y single back in 2012. Heavy though it was, it was also a fittingly powerful ode to a late great artist who was sorely missed at Lowlands.

Best Bites: Food options representing a range of cuisines were astonishingly varied. There were your festival-standard burgers and kebabs, and then ridiculous upgrades like pho and sushi and meat pies with mashed potatoes. Does freakin’ fondue need to be at a festival? Of course not! But how cool that it was? There wasn’t an area on site where some sort of eclectic, relatively well-priced grub wasn’t readily available, making staying well fed far less of a survival game than festivals sometimes make it.

Munten, It’s a Gas: To be fair, “well-priced” may be a bit of a ruse. Lowlands doesn’t accept currency beyond “munten,” small plastic coins that can be purchased in sheets and strips at specialized ATMs or vending booths. Each coin was valued at about €2.90, a number that became meaningless when spending two-and-a-half munten for a large beer or four for dinner. That probably works in the festival’s favor, though the tradeoff was an almost complete elimination of queues. Plus, the festival bought back unused munten at the end, so it’s not like they were scamming you out of cash.

The Best Around: Top acts went to the British contingent, with New Order and IDLES both putting on memorable sets. Seeing Bernard Sumner heartfelt response to the audience’s reaction to tracks like “Blue Monday” and Joy Division’s “Transmission” was touching. Hearing icons sing such classics like they’re still in peak condition is always incredible, as is witnessing a band on the rise tear apart a stage like IDLES did. Dressed in ponchos, frequently launching into fans’ faces, and spot-covering everything from “Girl You Know It’s True” to “Linger” to “My Heart Will Go On”, the Bristol punks were far and away the most engaging act of the weekend. Frontman Joe Talbot sincerely called Holland “the best country to play live music in in the world,” and the band played like he meant it.

Rock Me Armadillo: At the center of everything was the towering Armadillo, a 24-hour dance and food hall that somehow blended respite, refreshment, and recreation all in one place. Folks were raving it up well into Monday, egged on by Lowlands Radio DJs. Any other festival might have had something like this as the centerpiece activation; here, it was just a microcosm of everything Lowlands had to offer.

Why Can’t We Be Friends?: Allow me a personal aside. As amazing as Lowlands was, my experience wouldn’t have reached the heights it did if not for the UK and Irish press group I was lucky enough to fraternize with over that weird, wonderful weekend. To Niamh, Mary, Ali, Char, Jordan, Other Jordan, Tegan, Sarah, Cai, Milos, and Nikki for bringing us all together — that was one for the ages. Thank you for welcoming this lone American traveler into your absolutely cracked fold. 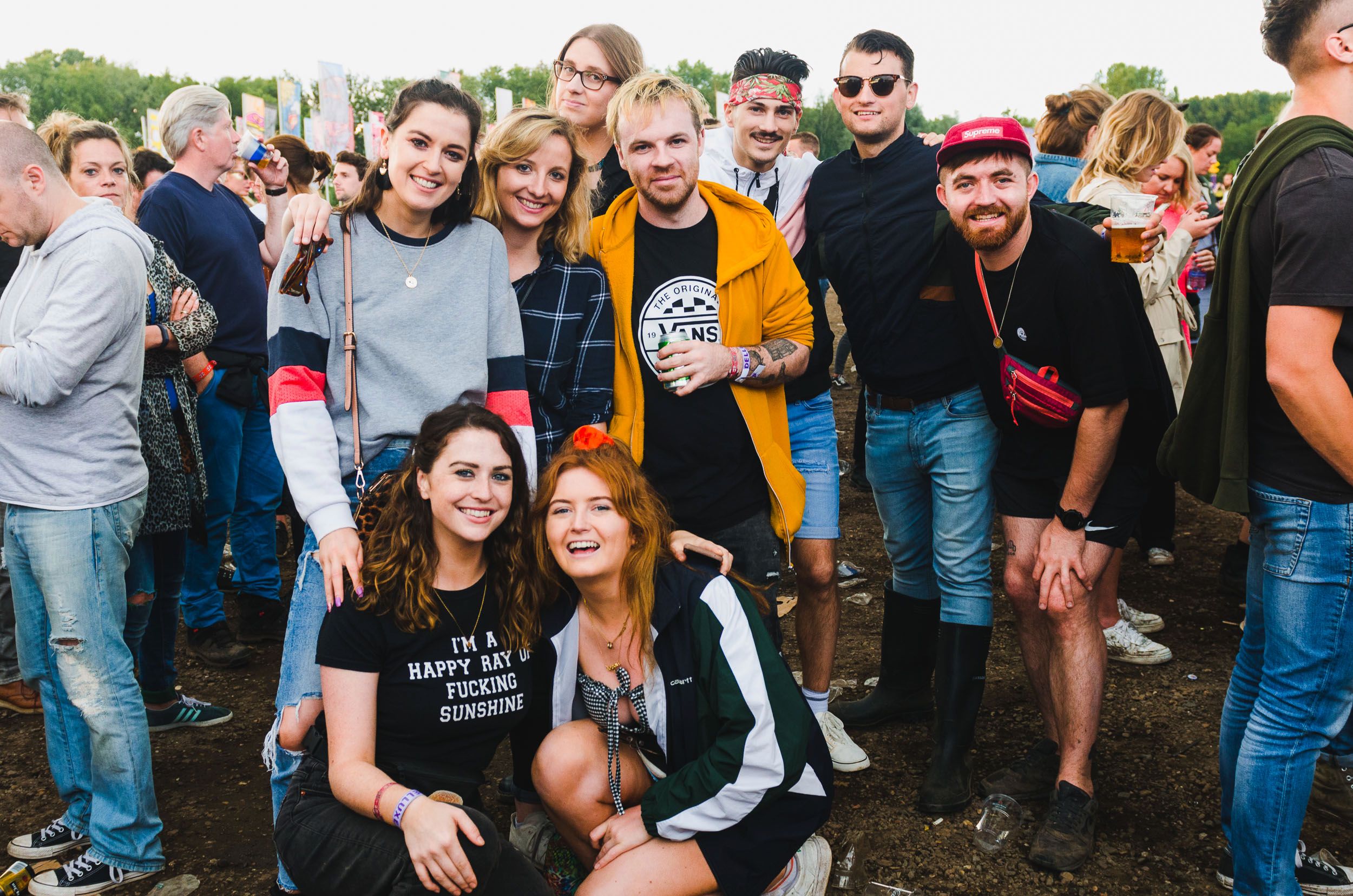 Coming Home: Not that I’m totally jaded by music festivals, but I’ve seen the experiential-focused gatherings, events designed for Instagram, and paradises of music. Sameness has plagued American festivals for years now, so it’s refreshing to be truly surprised. I’ve been lucky this year where I’ve had that reaction a number of times, and Lowlands easily edges out the competition.

There are surprises within surprises here, a wonderland of the unexpected. It’s all the more impressive in its execution, operating like a luxury experience hidden underneath the glorious chaos of a large scale camping festival. On top of all that was a lineup built with top-tier talent that would be enough to cause envy for any booker.

Frankly, I didn’t even know this 27-year-old event even existed before I was invited. Lord knows how it’s stayed a secret so long, because the Dutch are doing something extremely right at Lowlands.

Click to the next page for our full Lowlands Festival 2019 Photo Gallery.

The Dutch Do It Better: Lowlands Festival 2019 Review
Ben Kaye